The United Nations Country Team adopted the overarching objective of the United Nations Sustainable Development Cooperation Framework (UNSDCF) 2019 – 2023 as follows: “By 2030, Namibia is a developed nation with an equitable, peaceful and sustainable societal and economic fabric, a resilient environment and transformational governance in line with the Sustainable Development Goals (SDGs).”

The RCO works closely with all UNSDCF Pillars and other Theme Groups to coordinate and monitor the implementation of UNSDCF 2019 – 2023. The RCO acts as a first port-of-call to provide services and support to the Government of the Republic of Namibia (GRN) and other stakeholders, such as the private sector, civil society organisations and other development partners. Furthermore, the RCO, together with the relevant government counterpart, provides secretarial support to the Joint Steering Committee (JSC).

The UN Resident Coordinator in Namibia

Mr. Pang holds a wealth of experience in multilateral affairs and diplomacy. He has worked in areas of peace and security, arms control and disarmament, economic development, promotion and protection of human rights. At the United Nations, he has served with the United Nations Monitoring Verification and Inspection Commission (UNMOVIC) as Senior Activity Evaluation Officer from 2000 to 2005, under the leadership of the Swedish diplomat and politician Hans Martin Blix the head of UNMOVIC.

Mr. Pang holds a post-graduate degree from the Beijing Foreign Studies University and a bachelor’s degree in English and American literature from Fudan University, Shanghai. He is the author of several books and articles, which include writings on Contemporary Human Rights and the History of the UN over the past 60 years. 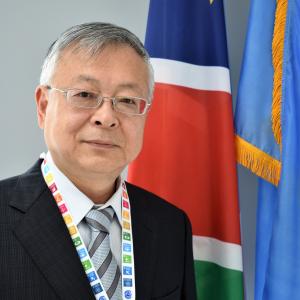